I received a simple invitation to attend an Italian Car Parade in Ottawa for June 16th, 2017. The invitation read as follows:

Hope you are well. I would like to share some details about this Vespa Parade I am organizing during the Italian Ween in Ottawa. I am trying to involve the local Vespistis and I hope you would support this event with your participation.
PROGRAM (June 17th, 2017):
• Parade Registration at Scotia Bank on Preston Street parking lot: 10:00 a.m.
• Retro Show (Scotia Bank parking lot): 10 am – 3 pm
• Parade Departure: 1:30 p.m.
Ferrari Festival Events

I was not planning to attend but my schedule cleared early Saturday morning so I decided to head downtown Ottawa for this “Parade”. I had never attended such a parade and I envisioned it to be a bunch of car enthusiasts with some old Fiats and such smelling like gasoline and oil meeting to discuss parts and repair and then driving around down town Ottawa.

When I arrived on Preston street I realized that this in fact was far bigger than I thought. They blocked off a complete section of Preston street for the parade and they were cars from Toronto, Montreal and some from even further away.  An hour before the parade people began to line the sides of the street. Vendors starting putting lambs on a fire spit and music began to play everywhere.

The main area was a Scotia Bank parking lot where there was a large tent filled with Italian engineering from the past. Cars, vans, scooters and more. The video below a collection of the pictures I took before the actual parade began. However, once the parade began, I had no way of taking pictures since I was leading the Vespa Pack.

Oh yes, my Vespa was like the Ferrari of all others there. Gleaming with her LED lights, Brembo brakes, Molossi exhaust and shocks and so much more. I met a really nice group of Vespa riders in Ottawa young and old. One common topic was the lack of a good garage to do the maintenance in the Ottawa area. I offered my services to a few to help with simple oil changes and belt cleaning.

I am certain that there will be a video of the parade that I will post later when I find it. There were many professional photographers and videographers there taking pictures and videos. I am certain they will pop up on their Facebook page or somewhere soon at which time I will update the post. 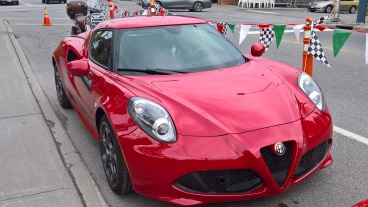 During the parade I was following the new Alfa Romeo and he would hang back before this long tunnel underpass on Preston and then rev his pipes and accelerate to impress the crowd. All the Ferrari’s and sports cars would do that since the tunnel would enhance the exhaust node. But funny enough as the Alfa Romeo would take off with his Abarth like exhaust, I would rev-up the Vespa with my Molossi exhaust and hang right on his tail beeping my horn. The crowd cheered and waved and I would like to think that it was my sexy Vespa and KLIM protective wear (LOL).

Updated Video of the Parade

The following was supplied generously by Mike Zaks who also rides a Vespa GTV-300. You can see me in front of the Vespa (riding with full gear).